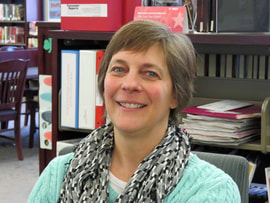 Talking with Julie Kirk is to experience the enthusiasm and vitality of someone who loves her job.  We are truly fortunate to have her as the Director of the New Castle Public Library, a library where she has had personal experience in a variety of positions, as she worked her way up through the ranks to her present executive position.

Born in Towson, Maryland, Julie says she gravitated naturally to the local library, where she enjoyed long hours of contented reading.  “I felt very secure and happy there. I know it is cliché,” she admits, “but I really love reading.”  Julie earned her BS degree in education from the University of Delaware in 1988.  While earning her undergraduate degree, she worked part time at the University’s Morris Library circulation desk.  In 1990, she married Tom Kirk and today they have a daughter, Carrie and a son, Dylan..

It was Tom, a born and raised New Castilian, who wanted to move back to Old New Castle, where he had family and long standing ties with the community.  In 1999, Julie found herself here with a young daughter and a baby. In 2001, Julie’s love of books brought her back to library work, this time at our New Castle Public Library.  She started as a Page, moved to Library Assistant, and was then promoted to Library Specialist.  When the position of Director opened at the end of 2011, Julie applied and was hired, with the understanding she would pursue a Master of Library and Information Science degree.  She entered this course of study at Drexell University in the spring of 2012, and was awarded this degree two years later, in the spring of 2014.  During this time, she was working continually as Director, wife, and mother- surely a tribute to her determination and dedication, qualities which serve her well as Director of the New Castle Public Library.
​
Julie’s vision and accomplishments continue to morph, for she views the New Castle Public Library as a living organism.  NCPL is a contract library, (NCPL has a contract with New Castle County to conduct library business), which allows for some independence within the state library system, but Julie observes the policies of the county on patron services, and her aim is to focus on extending the variety and range of programs provided.  Julie sees our library, above all, as a community center – a public gathering place.  She states, “The future of public libraries is technology.”  With a strong wi-fi connection and wide access to state provided technology, the library computers enjoy heavy community use.  Julie adds, “We are the only library in New Castle County with computers specifically designated for teens.”

Julie is appreciative of the supportive staff and their initiatives.  She insists that she could never manage the library successfully without them.  She also believes in volunteers and has extended the involvement of these hard-working individuals.  In addition, Julie is pleased with the relationship she has developed with library managers and administrators within the county.

Beyond her director’s duties, Julie has found time to organize and maintain a book club for mystery story enthusiasts, appropriately named, “The Usual Suspects”.  She appreciates the New Castle Library Friends and says she is delighted with our increasing financial support, which has enabled programs, such as Paws, and the Lego program, along with the Summer Reading Club.  The Friends also supported the digitization of local newspapers, which date back to 1938, and the establishment of the Library After Hours program. 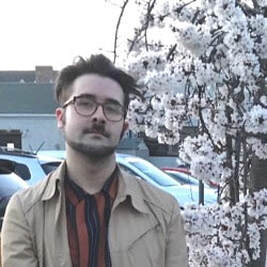 The New Castle Public Library welcomes Tyler Antoine as the new Adult Services Librarian.  Tyler began his position May 20, 2020, in the middle of the pandemic closure.  Although this was a challenging time to embrace his new position and initiate his vision, Tyler jumped in to thoroughly acquaint himself with the adult collection, but a public-less library hindered Tyler’s desire to interact with our patrons. Since his position includes program development, Tyler needs to get to know the interests and passions of our community members in order to develop programs that best serve them.

​Tyler comes to us from the position of Program Librarian at Rehoboth Beach Public Library, having previously gained experience at Dover Library and the library at Wesley College. In 2011, Tyler graduated from Temple University with an undergraduate degree in English and Creative Writing. In 2015, Tyler received his master’s degree in library science from Drexel University with an emphasis on public libraries.

When asked what Tyler hoped to bring to his position here, he enthusiastically responded that he wanted to use his studies and past experiences to view the adult collection and programs with a fresh perspective. He sees the library as a community center, partnering with public services, small businesses, the Historical Society, and restaurants. Yet again, his vision remains in the development stage due to the pandemic.

Tyler recently moved to New Castle to be close to work. He brings with him his interests in music and movies. He plays drums in a band and sings a bit. He enjoys art house films and most recently has flexed his culinary thumb.  With the resurrection of 70’s and 80’s pulp-horror novels, Tyler finds this genre to be a great escape from reality. He still enjoys literature and poetry, contemporary fiction, and celebrity biographies. His all-time favorite book is The Fall by Albert Camus. Tyler remembers reading this book in one sitting, and its profound influence on his views on morality and goodness. 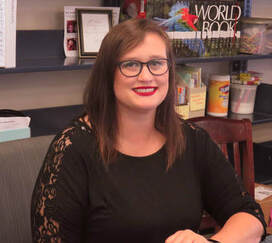 As Principal Library Assistant, Nicole is supervisor of circulation, which includes training pages and circulation staff, as well as dealing with fines and worn books.  She is also in charge of the Library’s Facebook Page.  She enjoys the varied aspects of her job and meeting with fellow Principle Library Assistants to share common challenges and solutions.

Nicole is a life-long New Castle resident.  She remembers getting her first library card from Jackie Harrad, our former Youth Services Specialist, and working here while an undergraduate student at the University of Delaware, pursuing a degree in secondary English education.  It was while substitute teaching at William Penn High School that Nicole attended a student book club that Sarah Thomas was running.  It was at this point that Nicole’s career took a turn.  Watching Sarah interact with youth, while discussing literature, Nicole could see her love for literature, teaching, and service take form in a library setting instead of the classroom.  Nicole next took a position at West Chester University’s library to explore and expand her library experiences.  She has been employed at NCPL for the past 5 years.

Nicole’s proudest accomplishment is her acceptance into a Master of Library and Information Science degree program at Florida State University, and her ongoing feat of working full-time, while going to school full-time.  She truly loves being able to directly apply her studies to her daily library work.

With work and school, there is little time for anything else, but Nicole still manages to read for pleasure and run. She and several library staff members recently participated in a 5K for PAWS for People, a program the Friends sponsor here at the library where children read to dogs. Nicole’s favorite genre is Young Adult Literature, with the Harry Potter series taking first place in her best reads category. 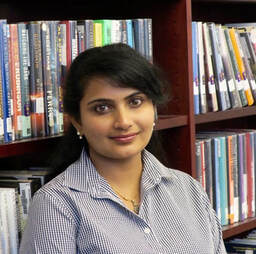 Preethy Cherian has been part of our library community for the past five years.  During this time, she has held three positions: Library Assistant, Principle Library Assistant and currently she is our Library Specialist.  Prior to working here Preethy’s educational background was in language and literature.  She thought she might want to teach, but a position as an aide opened at the Hockessin Library, which allowed Preethy to experience and embrace library science.  Her move to New Castle Library was a natural fit and career progression.

One initiative Preethy is especially pleased with is the Monday night Cultural Movies Series.  Recognizing a change in local demographics, Preethy wanted to promote respect for differences, tolerance, and understanding.  She wanted to use storytelling as the catalyst and she chose movies from various cultures as the vehicle.  Each month a different movie is screened.

Preethy enjoys travel.  This July she ventured to Italy and England.  She also enjoys new cuisines, and reading is a favorite pastime.  Her favorite genre is biography.

Preethy lives in the Pike Creek area of Wilmington with her husband and young son.  New Castle Library is fortunate to have Preethy Cherian as a dedicated staff member. 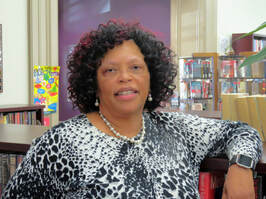 Lynne Smith is a Circulation Aide here at the New Castle Library.  She has held this part-time position for the last 6 years, working Tuesday and Thursday evenings, along with one Saturday per month.  Her responsibilities include checking in and checking out materials for patrons, collecting fines owed, and processing applications for library cards.  Her contact with other staff members and her interactions with the patrons are the best parts of her job. She is quoted as saying, “They are all good people.”

Lynne is well experienced for this position with us, for she has 30 plus years as Circulation Supervisor at the Delaware Tech Library.  She plans on retiring this June from her full-time position at Del Tech, and perhaps will pick up a few more hours in New Castle.

Born and raised in the Rosehill Gardens area of New Castle, Lynne graduated from DeLaWare High School, class of 1974.  She is married, with two children, and two grandchildren.

When sharing about her interests and hobbies, Lynne referred to herself as a “Foodie”- loving anything barbequed.  She also enjoys traveling.  Her trips have included California, Las Vegas, Florida, and Tennessee.  Lynne also enjoys shows and travels twice a year to New York City to take in the sights and sounds of Broadway.  In May she will see The Lion King.

Lynne likes shopping and reading, and just finished Danielle Steel’s novel Fall from Grace, but she especially enjoys listening to audio-books on her daily commute. 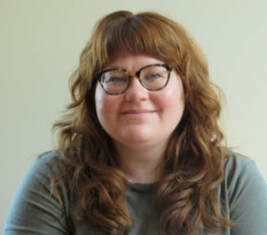 As our library doors open to the public, one may notice a new face on staff. In February of this year, Jen Wilson was hired as Administrative Aide. Then with the recent retirement of Patty O’Brien, staff assignments were shifted: Nicole Balance replaced Patty as Library Specialist, and Jen became the new Principal Library Assistant, filling Nicole’s previous position. As Principal Library Assistant, Jen is responsible for Circulation and making sure our library is following current county guidelines.

Jen has lived in Delaware most of her life. She has an administrative background. Her previous work experience includes serving as Library Specialist at Wilmington Delaware Technical  and a position in the technology center at Wilmington Public Library. In addition to her present library duties, she served as Vice President of the Delaware Library Association and recently moved into the position of President for this state organization. Jen was proud to share that she is one in five staff members from New Castle Public Library to serve on this board.

Jen’s hobbies include reading, cooking, and volunteering. She is involved with a Wilmington based organization, “Food Not Bombs” that provides food for the unhoused. Jen claims she will read anything, but she prefers Literary Fiction. Her all-time favorite book is The Secret History by Donna Tartt. Her current favorite book is Detransition, Baby by Torrey Peters. Both of these books appear in this month’s Book Recommendations section.

Jen is excited with anticipation with the library’s reopening and the increased presence of patrons gracing the building. She looks forward to putting faces to names. We are excited to introduce Jen, our newest staff member, and to welcome Jen to our community.